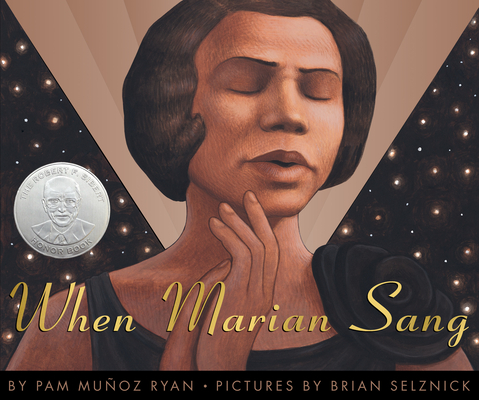 the cover page of When Marian Sang

When I first saw the cover of When Marian Sang, I was immediately attracted to and intrigued by the faithful and engrossed expression on the singer’s face, her eyes closed and her hands folded in front of her chest, showing a solemn engagement in her singing and inviting the readers to turn the page and see her story with music. Rendered in Sepia-toned acrylic illustrations, When Marian Sang is a beautiful  collaboration between the author Pam Muñoz Ryan and illustrator Brian Selznick about the incredible story of Marian Anderson, one of the greatest singers in America and an inspiring role model of courage in a pre-Civil Rights America when people of color were not allowed to pursue a professional career in concert music. Through concise and genuine language, the inclusion of the actual lyrics from the songs that influenced Marian and thousands of audience, and the intentionally designed illustration that serves as a visual metaphor of the opera stage, the book immerses readers in the powerful voice and extraordinary music talent of Marian Anderson and presents a time of heart-wrenching social injustice in American history in a manner that is accessible to young readers, many of whom perhaps did not experience the same hardships at first hand. Endpaper shows the opera stage. The story of Marian Anderson is about to start.

Right from the endpaper, the stage is set up (metaphorically, illustratively, and narratively). The stage in the illustration is the Metropolitan Opera House, which was the stage of her debut and also the ending scene of the book. With the page-turn, the curtains rise and the readers, as with the audience in the illustration, now sees a street view on stage and the young Marian sing in a fully-lit window, drawing attention from people onstage and in the audience.

Continuing the visual metaphor of the opera, the title page is visually designed as a program, with the author and illustrator named “libretto” and “staging” respectively. The verso presents a brief, poetic description of Marian’s voice as well as her life experience. The show starts now…

One of the sparks of this book is its inclusion of the actual verses that Marian sang that had profound meaning to or symbolism of particular time periods of her life (sometimes also as a poignant commentary on the social reality that people of color faced).  For example, on the following page, when the text is talking about how Marian travels to sing for racially separated audience and the illustration shows the troubling and exasperating image of a “colored waiting room”, the verses that Marian sings are about the oppression of Israeli in Egypt, mirroring the oppressive reality that African American people were living at that time.

When Marian embarks on a journey to Europe to learn singing, she feels homesick and starts singing on the ship; here, the full-spread page with sorrowful lyrics of a wandering child in the background of the boundless sea is filled with the deep connection and affection that Marian feels for her home and people, enabling readers to share her grief and uncertainty about the future.

Marian is sad to leave her mother and her country.

The use of full-bleed spreads is dazzling, evocative, and integral part of the book. For example, the culminating scene when seventy-thousand people congregate in front of the Lincoln Memorial to hear Marian sing is depicted in a full-bleed spread (in a horizontal, landscape scale) to show the sheer number of people, invoking a sense of awesomeness and anticipation. The last scene, Marian’s debut at Metropolitan Opera, is also depicted in a two-page spread where Marian’s vibrant-colored clothes are in stark contrast to the sepia tone in the rest of the picture, highlighting the real excellence of her musical talent as well as the tremendous courage and perseverance she embodied.

people in front of the Lincoln Memorial, waiting to hear Marian sing

Written with simple yet powerful words and illustrated in a way that faithfully captures Marian’s talent, dedication to music, and inspiration as an activist of social justice (in her own way), When Marian Sang is a brilliant, creative work that will fascinate readers of elementary grades. If I were to use this book in my class, in addition to a read-aloud and open discussion about the illustration, character traits, and themes of the book, I would also show my students actual video/audio clips of Marian’s performance to let them experience the magic and power of her voice in a different way, but just as authentic and influential as the picture book.