Schomburg: The Man Who Built a Library by Carole Boston Weatherford, illustrated by Eric Velasquez, tells the story of Arturo Schomburg, a black man living in the Harlem Renaissance. Schomburg collected books, music, art, and other works from Africa and people of African descent to bring to light these often forgotten historical documents and figures. The book follows Arturo’s life from a young black boy in Puerto Rico, curious about the contributions his ancestors made to history, through his journey to New York, and his years of researching and collecting the artifacts of “Africa’s sons and daughters.” When his collection became too big for him to keep, he sold it to the New York Public Library, where it soon became the “cornerstone of the Division of Negro History, Literature and Prints.” Arturo Schomburg left a legacy that lives on today; his work has acted as a beacon for scholars all over the world. Through the use of poetry with titles reflecting both the different chapters of Schomburg’s life and the many black historical figures whose work he collected, as well as amazingly realistic illustrations, Schomburg beautifully captures the essence of a man who was always busy working to make sure that his people had their rightful place in history. Written for an older elementary school audience, the book also extends the prime picture book age to include these older children.

Schomburg gives readers short biographies of many black historical figures, some of whom are well-known today for their contributions to the history of our country. However, while many of these men and women have become household names, their full stories often go untold. The book attempts to bring light to some of the lesser-known aspects of their lives.

In addition to giving readers more details about many already well-known black historical figures, Schomburg also features many “whitewashed” historical figures: those who were descended from slaves or of African descent but whose ties to Africa are left out of popular history. 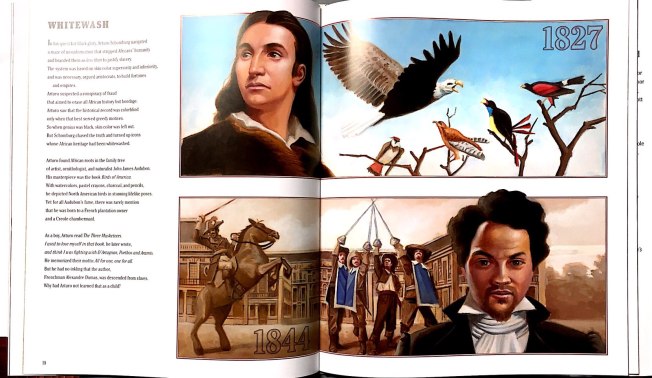 The book ends by returning to focus on the life and legacy of Schomburg himself. As written in the final poem of the book, “Epitaph: 1938”: “There was no field of human endeavor / that he did not till with his determined hand… / or that he did not water with a growing sense / of African heritage and awareness.”

This book is sorely needed in the world of children’s literature, because it features not only a wide range of black historical figures and those with African heritage, but also the man who made sure that these men and women had their rightful place in history. This book should be read in all schools to ensure that the youth of today get to know this incredible man, and that they can feel the pride of seeing themselves represented in history.